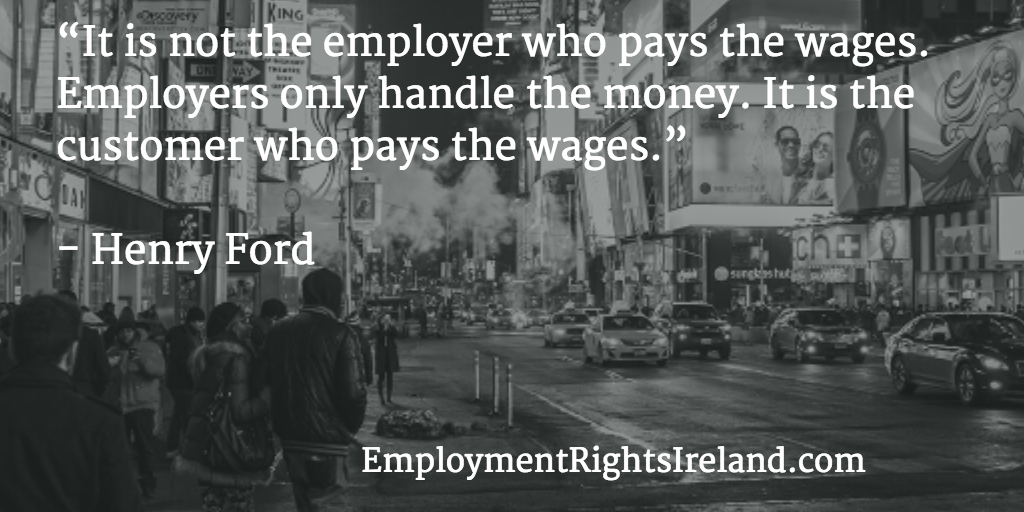 There’s a real sting in the tail of the legislation which provides for minimum rates of pay-the National Minimum Wage Act, 2000.

That sting is that breaches of the Act are criminal offences which are punishable with hefty fines and/or prison sentences.

The National Minimum Wage Act, 2000 provides for a minimum hourly rate of pay.

An experience adult worker, for the purposes of the Act, is an employee who is not: (i) under age 18 or (ii) in the first two years after the date of first employment over age 18, or (iii) a trainee undergoing a course that satisfies the conditions set out in S.I. No. 99 of 2000.

All employees, including full time, part time, casual, and temporary are covered by the act with the exception of

Employees who are paid by piece rate rather than hourly rate are still entitled to the minimum wage.

Here are the minimum hourly rates:

NB Each one third period must be at least one month and no longer than twelve months.

Only work experience obtained after reaching the age of 18 is counted for the rates above.

It is a criminal offence for an employer to pay less than these rates.

The fact of an employee moving from one employer to another does not affect his entitlements.

When calculating the average hourly pay the working hours includes overtime worked and any time spent on standby.

The pay to be included in the calculation of the hourly rate of pay includes:

Pay which is not included in the calculation includes:

This list is non-exhaustive but I hope you have a clear idea of how the hourly rate of pay is calculated.

An employee is entitled to a written statement from an employer detailing his/ her reckonable pay, working hours, average hourly rate of pay and statutory minimum hourly rate of pay entitlement under the Act, in a pay reference period or periods, within the previous twelve months.

However, if the employee has earned an average hourly rate of reckonable pay of €12.98 or over in the specific pay reference period, the employer is not obliged to supply the employee with the written statement.

Employer not able to pay?

The employer can be granted an exemption by the Labour Court from paying €8.65 per hour. In order to obtain it he must show that he would likely terminate the employment of an employee or put the employee on lay-off.

The employer must have the consent of an employee or at least the consent of the majority of employees affected to apply to the Labour Court for a temporary exemption.

Remedies for the employee

There are 2 courses of action open to the employee if he is not being paid the minimum wage:

The employee must choose, though, as he cannot take both routes with the same complaint.

Records and burden of proof

An employer must keep all records that are necessary to show whether this Act is being complied with in relation to an employee, for at least three years from the date any record is made.

In any dispute about national minimum wage entitlements, the onus is on the employer to prove that the law has been complied with. To enable the employer to do this, records will be required.

Records will also be required to show a NERA inspector that the law is being complied with if necessary.

It is a criminal offence to fail to comply with the obligations of the National Minimum Wage Act, 2000, and this applies to

The minimum wage in Ireland was increased on 1st January, 2016 to €9.15 per hour. This wage rate applies to all employees, regardless of whether part time, full time, temporary, or casual.

However, some employees are excluded:

See statutory instrument 99/2000 in relation to Prescribed Courses of Study or Training.

From 1st January, 2018 the minimum wages is as follows:

Since 4 March 2019 trainee rates are abolished pursuant to the Employment (Miscellaneous Provisions) Act 2018.