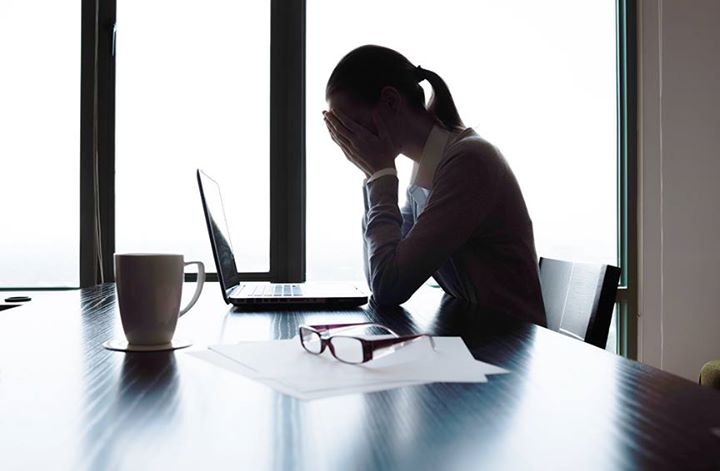 Mary suffered in silence in her job for a long time-nearly 12 months, in fact. She was brave, and hard working, and stoic and just got on with it.

Her boss was a headcase, a bully with no regard for the dignity or feelings of those around him.

He wanted to get the job done, he wanted results, he wanted them now, and if you wanted to give him some cock and bull story or excuses, well ‘you know where the door is’.

At first, she joked with her husband and friends that she now worked in ‘Dante’s Inferno’. She called him ‘Lucifer’. The joke soon wore thin, however.

The first sign was her mood-it became irritable at home and she was much more inclined to snap at her husband and the kids. She was impatient and tired all the time and devoid of energy or interest in stuff outside work.

Then it insidiously crept into her bedroom and she had trouble sleeping.

At night her mind would race as she lay in bed thinking about what she had done in work that day, what she had and hadn’t achieved, what was on the calendar tomorrow, had she forgotten or overlooked anything, how long can she endure more of this crap, should she just quit and walk away.

She had worked hard for this career, did well in college, did well in her previous jobs, always performed well and had good performance reviews, and did well in this one until he-Lucifer- arrived.

At first, she thought it was just a personality or ‘style’ issue, a clash of approaches/cultures, and she was determined she would get used to him, and his moods. She would adapt. She was strong, resilient, tough. She hadn’t failed before.

One day in November, however, she just couldn’t face it. She was literally frozen with fear and apprehension and went to her doctor. Her GP listened patiently and sympathetically for 45 minutes while Mary poured her heart out. He told her he had no doubt- she was suffering from severe stress and anxiety as a consequence of the issues in the workplace and she needed a break immediately. He also referred her to a psychiatrist.

Six months later Mary came to see me. She was still off work and her condition had only improved very marginally. She could not see any way under the sun she could return to that job under that man and wanted to enquire about her legal options.

She told me the kids wanted their mammy back, and she could not see this happening if she returned to the same workplace. This time she felt she had to walk away. It simply wasn’t worth it.

She’d get another job. But had she any legal redress, she enquired.

This type of situation is not uncommon and the most obvious options would be one or all of the following:

She had one major problem, however, no matter which way she approached the problem: she never complained. Not formally, not informally-she just ‘got on with it’.

To succeed with any of these claims she will have a difficult time overcoming the one fatal flaw in her case: the employer will claim ‘we never knew there was a problem, for she never complained’.

And this is a big problem for her.

No doubt, the employer should know what is going on in the workplace, and is obliged to know. But when the accusation is thrown at the employer the employer will argue that he acted reasonably and did what any employer would do in circumstances where no complaint was made: nothing.

But this will be a problem. Since we were kids we know how to make complaint. And that complaint, at a minimum, would have helped Mary’s situation immensely.

It would have been better again if she had made a formal written complaint in accordance with the grievance or dignity at work procedure in the workplace. And if her complaint was not dealt with properly she could have followed up.

But she needed to complain. And then exhausted the internal procedures open to her. Because the problems she faces are as follows:

Generally, to win a claim for constructive dismissal, you must show you acted reasonably before quitting your job. This involves

Otherwise, you face the problem of the employer saying, ‘he/she never told me there was a problem-we would have fixed it if we knew’.

To win a personal injury claim against your employer you need to show:

But if you don’t make a complaint? It will be hard to prove the employer failed to act reasonably. And harder, therefore, to prove negligence and win your case.

I am not telling you that you should be making complaints or raising grievances in the workplace at the drop of a hat.

You are required to have a certain degree of robustness in the normal day to day activities in the workplace. There will be a certain element of rough and tumble in the normal interactions between human beings.

But if you at some point in the future want to bring a claim or legal proceedings against your employer, and you wish to prove you had no choice but to leave the job or suffered a personal injury and he is liable, you will need to show some evidence of difficulties in the workplace and your attempts to resolve the problem.

Suffering in silence is not advisable from a health or legal perspective. If you do there is a good chance that, as the old Turkish proverb goes, the dogs will bark but the caravan will move on.