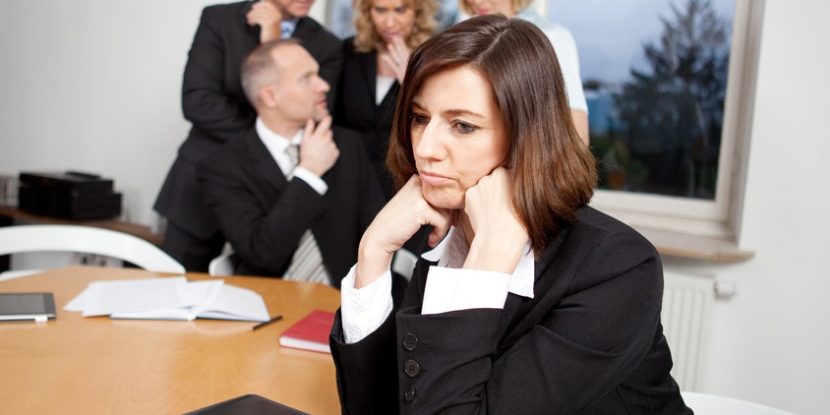 When Melissa¹ came to see me she was very upset and was anxious to pursue her employer if that was possible.

Except she didn’t say ‘pursue her employer’.

She wanted to teach him a costly lesson and ‘put manners on him’. She wanted to take him into a metaphorical darkened room and give him a good ‘seeing to’.

To help me visualise what he looked like she told me to just picture Boycie, the second hand car dealer, in ‘Only Fools and Horses’.

Anyway, once she was seated and settled she told me her story.

Melissa told me that she was being bullied in work, nothing she did appeared to be good enough, she had enough and now wanted to see about taking legal action against the bully (her manager) or her employer, or both.

I asked her to tell me her story, the gory details. What she told me over the next 45 minutes was her version of ‘being bullied’.

Firstly, she told me she had been a loyal, hardworking member of staff for over 5 years and had never received a raise.

She also told me that recently she had looked for a day off because she had nobody to mind her child when the school was closed for a day. And her manager, the alleged bully, had made such a song and dance of it that you would think she was asking him to give her the rest of the month off, or something.

And then she told me about the nitpicking way her manager had of going on about her work.

Melissa was a member of the administrative staff and had to do a bit of debt collection, too, to chase up slow debtors. Her manager was forever pointing out mistakes or typographical errors she made but she made the point that she only made these mistakes because she was trying so hard and was under pressure.

Now he is criticising her for her phone manner in speaking with customers, now it’s the odd mistake in the letters she is sending out, now it is her time-keeping.

And then, he has mentioned the possibility of putting her on a PIP-a performance improvement plan-if her performance does not improve.

She had reached the end of the line with him and her employer and now wanted to bring a claim or legal proceedings to ensure the bullying stopped and ensure ‘others did not have to go through what I have to endure’.

And if she was compensated for the distress caused to her by her manager and/or employer, well all the better. She was finding it hard enough to make ends meet as it is.

I keep a box of tissues in the back office and had already placed them on my desk in front of her before she started telling me her story. Now, I had to give her my opinion and advise her about the prospects for any claim she brought against her employer. I feared the tissues would be now used more liberally for the news I had to give her was not what she wanted to hear.

“repeated inappropriate behaviour, direct or indirect, whether verbal, physical or otherwise, conducted by one or more persons against another or others, at the place of work and/or in the course of employment, which could reasonably be regarded as undermining the individual‘s right to dignity at work.” (Health and Safety Authority)

The Supreme Court, in Quigley v Complex Tooling and Moulding Limited, held that bullying must be ‘repeated, inappropriate and undermining of the dignity of the employee at work’.

The Supreme Court, in 2017 in the Ruffley v Board of Management of St. Anne’s school case, held that the behaviour complained of must be repeated, a pattern of behaviour and the question of undermining the dignity of the employee is critical; such behaviours must be “behaviour which is inappropriate at a human level” and Mr. Justice Charleton said, “conduct is be judged according to the standard of human beings, and not of angels.”

I tried to impress upon Melissa that the conduct she complained of was unlikely to reach the required standard as confirmed by the Supreme Court. In fact, the manager making a song and dance of a request for a day off, while frustrating and annoying for her, is a one off event and cannot constitute bullying, unless it is part of a pattern of repeated behaviour.

I moved on to the question of mistakes in her work and the concern of her manager with her performance, particularly mistakes in letters going out or poor treatment of customers on the phone.

I had to tell her that any employer is entitled to expect a certain standard in the workplace and if the employee does not meet this standard then a Performance Improvement Plan is always a lawful possibility.

But that this was not, of itself, bullying behaviour.

I then had to give Melissa more bad news in relation to her ‘case’.

And that was that even if she managed to surmount the high bar set by the Supreme Court in ‘Ruffley’ to actually prove truly bullying behaviour the options open to her by way of remedy also brought their own problems.

One remedy open to her, for example, was to bring a claim to the WRC under the Industrial Relations act 1969 claiming that there was a trade dispute between her and her employer insofar as the employer had failed to prevent bullying in the workplace. However, if the employer objected to such an investigation by the WRC, as it was referred under the Industrial Relations legislation, the WRC could not deal with it.

If this happened she could go to the Labour Court, but any recommendation in her favour from the Labour Court would be legally unenforceable-the employer could simply ignore it and the only way to enforce it would be through industrial relations action such as a picket.

A second remedy open to her would be to resign and bring a claim for constructive dismissal. I had to advise her that her claim had little chance of success as she had not exhausted the internal procedures yet.

A third remedy would be to bring a personal injuries claim. The difficulty with this is that she would have to prove she had suffered an identifiable psychiatric injury as the Supreme Court held,

“the plaintiff cannot succeed in his claim unless he also proved that he suffered damage amounting to personal injury as a result of his employer’s breach of duty. Where the personal injury is not a direct physical kind it must amount to an identifiable psychiatric injury.”

I was also obliged to tell her that this type of case was a difficult case to win, and would be slow and costly due to legal costs and expert medical reports required, including a consultant psychiatric report which would be relied upon to proved she had suffered an identifiable psychiatric injury.

Bullying is an easy allegation to throw around, and I hear it all the time, quite frankly. But from a legal perspective bullying requires a particularly high standard of proof and, according to the Supreme Court, “conduct is be judged according to the standard of human beings, and not of angels.”

Melissa was exceptionally disappointed but I would be doing her a grave disservice if I did not tell her what I made of her situation honestly and plainly. Last I heard Melissa had left that job and is happy in her new role which, fortunately, is closer to her home.

¹Please note: “Melissa” is not a real name, although the facts of the story above are true.